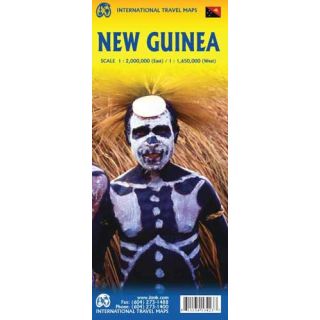 The South Pacific island of New Guinea is divided between two countries, the Republic of Papua New Guinea, and the Indonesian province of West Irian. The nearby islands of the Bismarck Archipelago, Bougainville Island of the Solomons, plus Seram/Ceram, Ambon and mof East Timor are also included. Whatever roads exist are shown, but most people fly from one destination to another. The West Irian side can best be visited by inter-island boats, as roads are few.