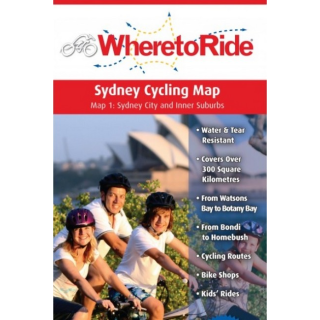 Where to Ride Sydney Cycling map

This detailed, full colour map, covers over 300 square kilometres of central Sydney, stretching from Watsons Bay to Botany Bay, and from Bondi to Homebush.

The editor has teamed up with Ausway, publishers of the iconic Sydway street directory, to reproduce their unrivalled mapping. All of the roads and freeways have been faded to grey, then four layers of colour coded cycling routes have been accurately overlaid. The first, in red, shows the rides from our popular Where to Ride Sydney guidebook. Next, in yellow, are off road cycle paths. On road cycling lanes are in dashed blue. Last, but certainly not least, in dotted green are the myriad of informal cycling routes. These may not be on any official maps, but for real world cyclists they are the best routes to avoid the traffic or to take short cuts. Youll also see a set of symbols to pinpoint every bike shop, kids cycle area and more.

iPhones and Garmins are clever devices, but to see such a broad expanse of Sydney in minute detail, with every cycling feature so clearly highlighted, nothing comes close to our Where to Ride Sydney Cycling Map. Its the perfect companion for all cyclists!